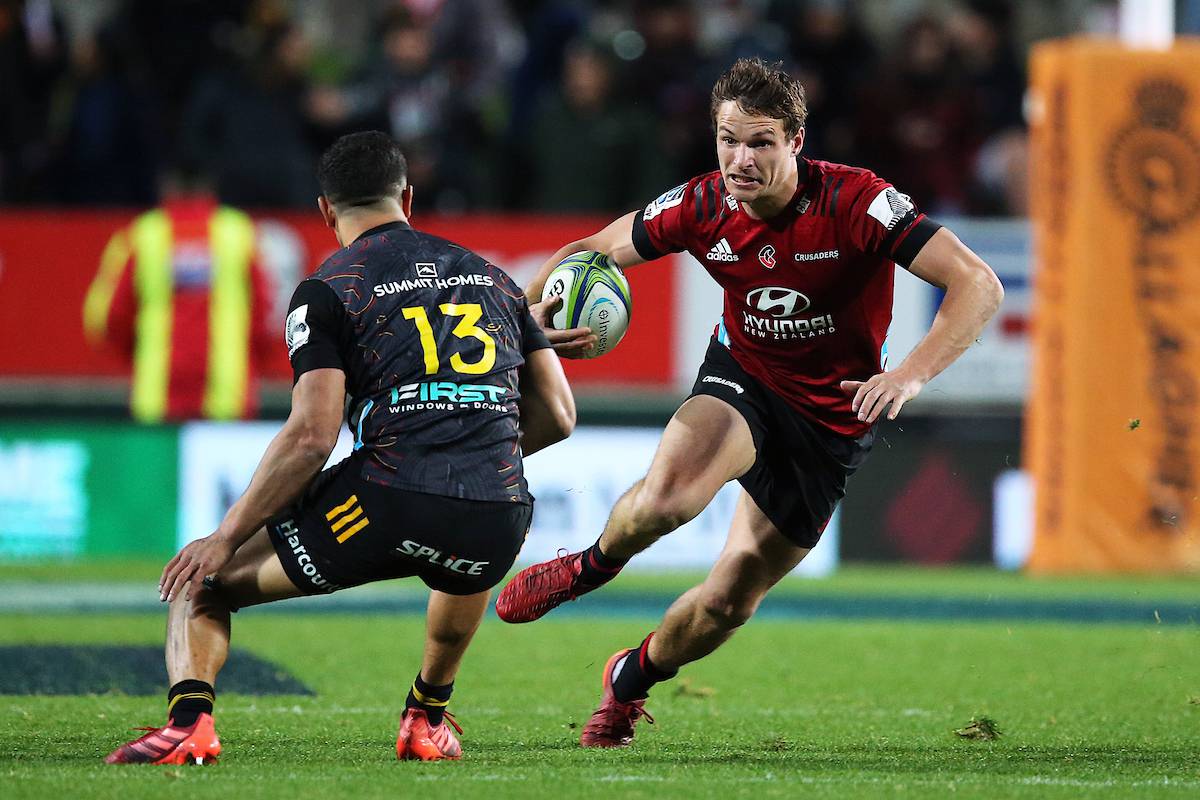 The Crusaders are one win away from the inaugural Super Rugby Aotearoa title after a controversy-tinged victory in Hamilton.

Rebounding from their first home loss in four years to the Hurricanes last week, the Crusaders compounded the Chiefs’ misery by handing Warren Gatland’s men their eighth-straight defeat, one which again put the officials in the spotlight.

Who was your standout player? Have your say with our interactive player ratings

The Chiefs have felt dudded by the officials several times this season – last week’s final play at Eden Park merely the last example. Gatland is again likely to take umbrage with a crucial decision midway through the second half which helped the Crusaders kick clear.

With 20 minutes remaining and one point separating the teams, Sevu Reece scored after what appeared to be a knock on from Quinten Strange. The Crusaders lock dragged the ball forward with momentum before Reece swooped.

Referee Ben O’Keeffe and television match official Glenn Newman believed otherwise, ruling in favour of Reece to hand the visitors an eight-point lead that proved much too difficult to overturn.

The Crusaders scored a classy try after that movement – Richie Mo’unga injecting himself on an inside ball to send Leicester Fainga’anuku over. But Reece’s dubious try hugely influenced the outcome in front of 15,082 locals.

Close but not good enough remains the sad story of the Chiefs season. Five-tries-to-one once again highlights their attacking struggles since lockdown. Not even Aaron Cruden’s 100th Super Rugby match could inspire them to snap their record losing streak.

Everyone other than Crusaders supporters wanted a Chiefs victory to keep the title race alive but it was not to be.

Instead the bonus point victory celebrates Sam Whitelock’s 150th match and pushes the Crusaders seven points clear of Blues at the top of the table. Scott Robertson’s side only needs one win from their remaining two fixtures – against the Highlanders in Christchurch and the Blues at Eden Park – to claim the crown.

If the Chiefs are searching positives they need look no further than Lachlan Boshier, their everywhere man. In another losing effort Boshier produced standout performance at the breakdown, on defence, at the lineout and he claimed his side’s only try in a 63 minute shift while carrying an ankle knock.

The loose forwards mix for the All Blacks is incredibly competitive but Boshier continues to state his case.

The Chiefs trailed 17-10 at halftime but they never held the lead and were chasing the game from the outset after a poor start, particularly on defence.

The Crusaders set the tone by scoring two tries in the opening 15 minutes. Tom Sanders found himself charging down the touchline and over the top of a brave Damian McKenzie after quick hands down the short side found space on the edge. Will Jordan then waltzed past Shaun Stevenson in the second instance of poor Chiefs defending to hand the Crusaders a 12-0 lead early.

Jordan and George Bridge often popped up at first receiver but whenever Mo’unga challenged the line the All Blacks first five-eighth was lethal with his stepping and offloading causing havoc on several occasions.

Sam Cane and Boshier were supreme defensively and at the breakdown where they both snaffled turnovers. On attack, fellow Chiefs loose forward Pita Gus Sowakula stormed off the back of the scrum with telling carries.

The Chiefs’ kicking game, however, left a lot to be desired. They kicked too much and inaccurately – too often straight to the Crusaders back three which allowed repeated counter attacking chances.

They were also guilty of forcing the play. McKenzie’s cross-field kick sailed well wide of Sean Wainui and Brad Weber’s inside flick ball another example of attacking impatience.

While the Chiefs did well to recover from the opening onslaught and work their way back into the match they went to the sheds one man short and seven points down.

Stevenson’s night went from bad to worse when he was yellow carded for intentionally knocking the ball down and Codie Taylor then rumbled 15 metres over from a lineout drive to strike on halftime, as the Crusaders so often do.

Reece’s strike will leave a sour taste for the Chiefs but their losing habit is near impossible to break.

With a final round bye, the Chiefs have one more chance to end this winless run in Wellington next week.