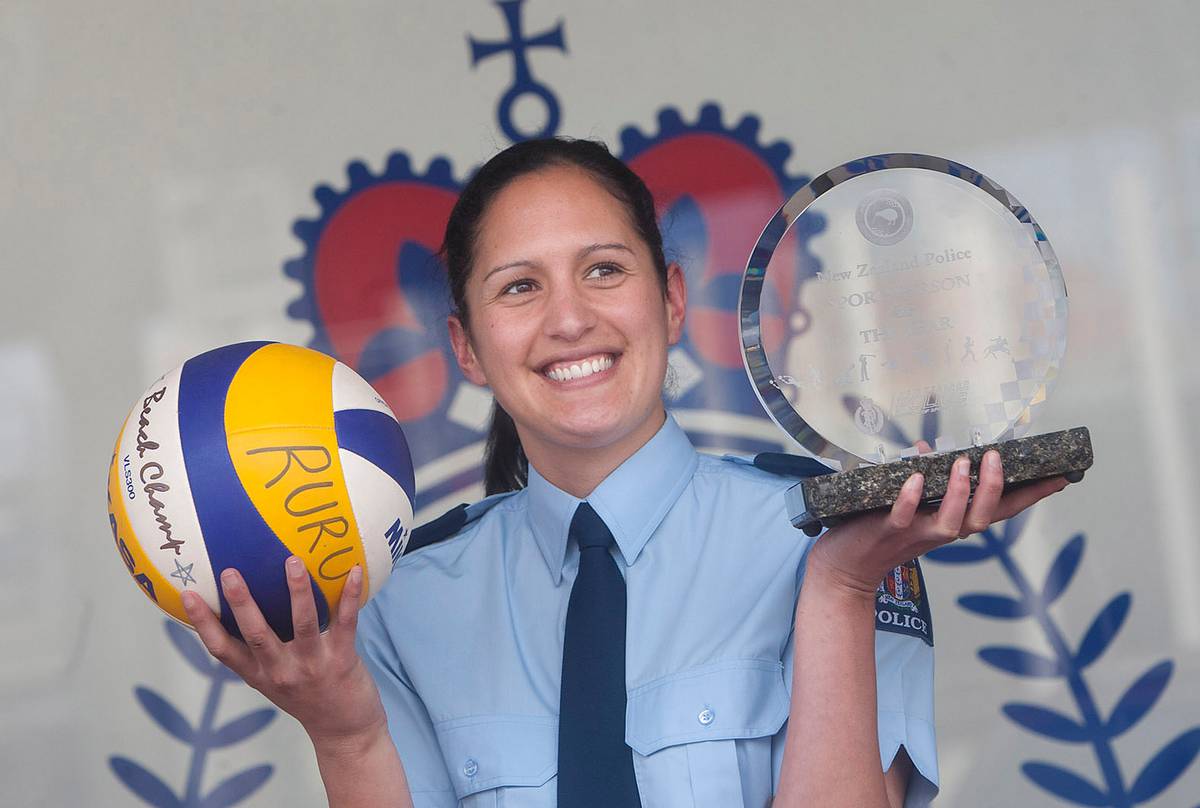 She was a Rotorua police detective with national sporting prowess, he was an Olympic boxing hopeful and good friend.

But together Detective Constable Melissa-Mae Ruru, 35, and Tyson Sykes, 32, cheated the justice system by submitting false community work records which gave Sykes an “easy ride” when it came to completing a court-ordered sentence.

Now a Rotorua District Court jury has found Ruru and Sykes guilty of one of two counts each of attempting to defeat the course of justice in 2017.

Ruru has been found guilty of two separate forgery charges after she signed Sykes’ signature on community work forms and an Olympic form.

The jury returned not-guilty verdicts for a joint charge the pair faced of defeating the course of justice in 2016, also relating to submitting false community work records.

Ruru cried as the verdicts were read. Both declined to comment to the media afterwards.

It’s a fall from grace for Ruru – also a former Olympic hopeful and national and regional sporting representative – who won the Police Sportsperson of the Year award in 2012, fronted media campaigns and appeared on the television series Women in Blue.

The two-week trial included defence evidence from Rotorua-born actor Temuera Morrison, who did boxing training with Sykes and Ruru.

He told the jury Ruru “lived and breathed the law” and Sykes was so inspirational, everyone wanted to fight like him.

But it was hundreds of personal Facebook messages discovered by police following a search of Sykes’ home in 2018 that proved the evidential blow that showed she “blurred the lines” as a police officer.

Sykes was cleared by Community Probation to do his community work at the Sykes Boxing Gym owned by his father, Michael, and where Ruru worked as a volunteer manager.

Ruru was deemed an ideal person to sign off his hours because she was a police officer.

But she was also his close friend and personal boxing manager, helping him with his dreams of going to the Rio Olympics.

Judge Phillip Cooper told the jury there was nothing in the messages to suggest Sykes and Ruru had an intimate relationship.

Messages from Ruru to Sykes included statements like: “Hey if probation asks, you did six hours on Saturday” and asking Sykes if he was attending boxing fights to “just show your face” so she could put him down for community work hours.

Relating to the forgery charges, she sent messages such as: “If anyone rings, you just signed this form in front of me, it’s an athlete agreement form. Just say you signed the form.” She then sent a photo of the form with a signature next to Sykes’ name, to which he replied: “Ok mate, I trust you”.

Messages from Ruru to Sykes about community work records said things like: “I’m just going to sign them for you if that’s sweet”, with Sykes replying “Sing (sic) away … “.

It was the Crown’s case that Ruru was invested in Sykes and in her desire to help him she was “prepared to break and bend the rules” and get community work out of the way.

She didn’t supervise him like she was told she had to and wrote down more community work hours when in fact he was doing his own training, competing in his own bouts or not doing any work at all.

Ruru’s identity has been kept under wraps since her arrest in 2018 after she was granted interim name and occupation suppression by the Rotorua District Court.

That suppression order, which was lifted today, prevented media from publishing any relevant coverage of the case so far.

Sykes had been ordered to do 200 hours’ community work in 2016 and 120 hours in 2017 after being caught on both occasions driving while disqualified.

The jury heard evidence from Community Probation officer Emma Ellis-Jones who said the deal was Sykes was to be supervised by Ruru while doing tasks such as cleaning, minor maintenance and groundskeeping at the gym as well as mentoring young boxers.

If she was to be away or not present, she could nominate someone else who would need to be approved as a sponsor in the same way she was, Ellis-Jones said during evidence.

Ruru took the stand and said she wasn’t present for about 25 per cent of the hours. She said she called Community Probation and arranged for Campbell Morrison, who also worked at the gym, to supervise Sykes.

It came out in evidence that Morrison is deaf and is hard to communicate with, but Ruru was adamant in her evidence Morrison knew what she was asking him to do.

Morrison became ill before the trial got under way and couldn’t be called by the Crown as a witness.

Ruru said during her evidence it was always her understanding from phone conversations with Community Probation staff that the organisation was fine with the way she was doing things.

Crown prosecutor Hayley Sheridan told the jury during her closing statements that from reading the messages, it was clear what was going on.

She described Ruru as “evasive” in her evidence and said despite denying the pair were friends, the messages proved they were in contact on almost a daily basis sharing personal information.

When Sykes was sentenced to more community work hours in 2017, Ruru was once again deemed by Community Probation to be an ideal sponsor to supervise his hours.

In her evidence, Ruru said Sykes was with the kids during those hours mentoring and it wasn’t uncommon for tournaments to go all day, starting with weigh-ins first thing in the morning.

Sykes responded: “I can see what you’re doing there, haha”.

On May 30, 2017, she sent him a message saying she really needed him to sign off the community work records. In the message, she said: “I would sign the form you but I’ve forgot what your signature looks like lol.”

The following day, she sent him a photo of the form with all his signatures on it. Sykes responded: “Correct, correct, correct mate, ha, thank you again mate.”

Sheridan questioned Ruru about how she got colleagues to do checks on the police intelligence system, known as NIA, for Sykes. The checks were to see when Sykes would get his licence back.

Ruru denied in evidence she arranged for colleagues to check NIA because it was a bad look for her to be linked to it. She said she allowed it to happen because it was keeping Sykes from breaking the law.

It was the defence case that the Facebook messages couldn’t be taken on face value and they were just jokes between the pair.

Temuera Morrison said he was good friends with the Sykes family.

He said Michael Sykes helped him train for his movie roles, including getting him physically fit for his role as Jake The Muss in Once Were Warriors.

Morrison said he got to know Ruru when she started managing the gym and she had good administrative skills and engaged well with the young boxers there.

“She was way cool … She was a policewoman … She is the kind of person who was a real role model, more so than us Hollywood actors.”

Morrison said he had a good eye for talent and he knew people like “The Rock”. He said there was an air of excitement around Sykes as he was ready to turn professional and everyone at the gym was “on board the waka”.

Morrison said he was prepared to use his contacts to help Sykes.

“Tyson is a bit of a hard case . . . He will test the parameters to see how far it would go and there was always fun and laughter but we always knew there was that line with Mel [Ruru].”

Morrison described to the jury the influence Sykes had on people who watched him fight and train.

Lawson also called David Wells, who trained at the Sykes Boxing Gym and helped sponsor Sykes’ career. Wells gave evidence about the difference in the youngsters under the mentoring of Sykes while he was doing the community work.

He said young boys would arrive at the gym with their “pants around their ankles and caps backwards” but within a short time, they would shake your hand and look you in the eye.

He said this was a direct result of watching and learning from someone like Sykes.
Braithwaite said it was a “stroke of genius” for Community Probation to allow Sykes to mentor young boys as part of community work and was a lot more valuable than “digging holes and painting fences”.

Ruru, who took the stand, denied she and Sykes were good friends – despite the Crown pointing out there were almost daily messages.

She said the messages were jokes and her way of communicating with Sykes to keep him on track as he responded better to that kind of direction.

The jury heard Ruru is subject to a police disciplinary case.

The pair have been remanded on bail to be sentenced on October 30.

Lawson asked for Ruru’s name suppression to continue until sentencing but Judge Cooper declined the request, saying the purpose of name suppression was to allow Ruru to have a fair trial, which was no longer relevant.

• Melissa-Mae Ruru, 35, and Tyson Jack Sykes, 32, were found guilty of willfully attempting to defeat the course of justice by completing and submitting false records in relation to Sykes’ sentence of community work between April 28 and September 30, 2017.

• They were found not guilty of willfully attempting to defeat the course of justice by completing and submitting false records in relation to Sykes’ sentence of community work between March 1 and August 31, 2016.