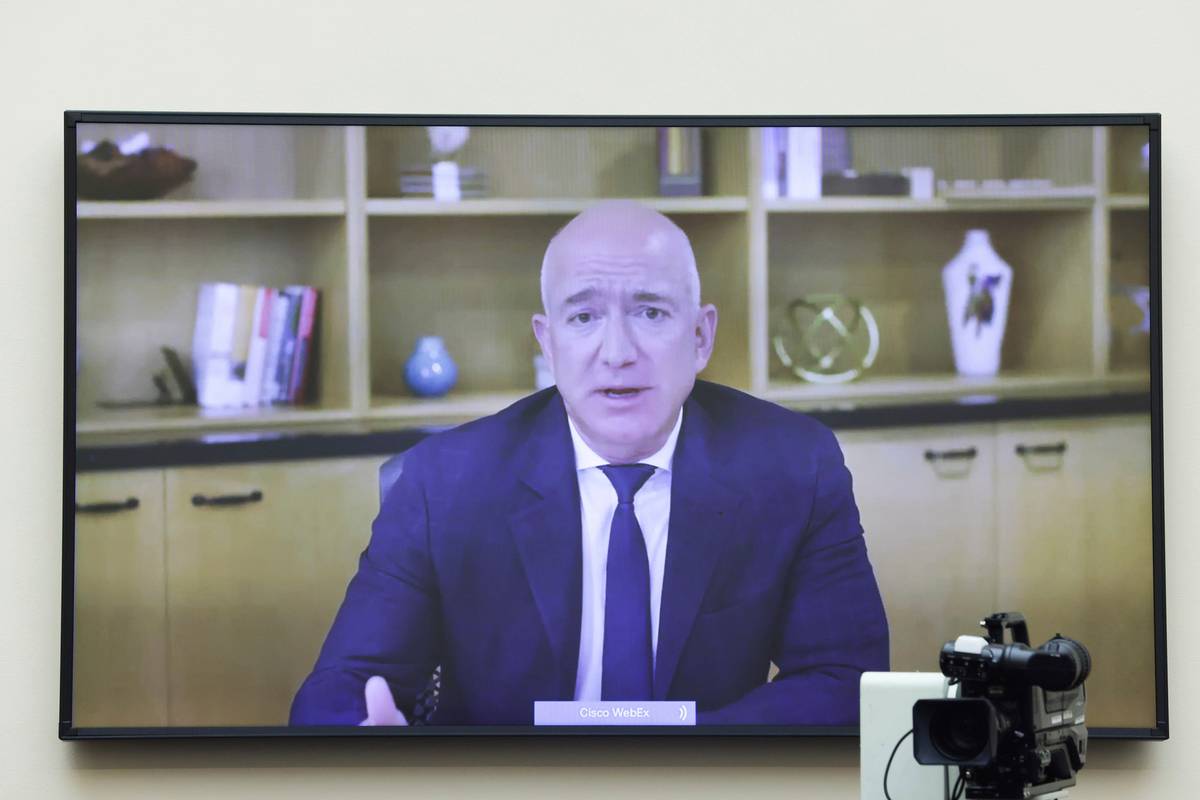 “Unmute your microphones and raise your right hands,” the Congressman said, and four of the world’s most powerful executives on the giant video screen complied simultaneously. Democracy in 2020 is an odd spectacle.

The long-awaited hearing was pushed back by 60 minutes when somebody realised the room had to be cleaned after its previous occupants. The delay that does not exactly inspire confidence in the ability of America’s political apparatus to rein in Silicon Valley.

The WebEx software that the tech bosses used to dial in for video testimony also endured technical glitches. At one point, the hearing was paused because one witness could not connect. At another, Amazon’s boss failed to answer a question because his microphone was deactivated. “Mr Bezos, you’re on mute,” multiple people interjected. Perhaps Pichai could have suggested moving to Google Meet. The feed on YouTube, after all, was flawless.

In theory, Bezos, Pichai, Cook and Zuckerberg were there to inform an investigation into their companies’ size and power. The companies’ growing influence over the world’s enterprise and conversation is one of the key policy challenges of the decade, and new laws to address tech’s dominance are a priority.

Antitrust Subcommittee chief David Cicilline called the executives “emperors of the online economy”. “Simply put, they have too much power,” he said, in a forceful opening statement. Unfortunately, that represented a high water mark for the hearing.

Predictions that the event would descend into political farce were realised quickly, when Congressman Jim Jordan embarked on an unbroken monologue about political bias at Twitter, a company that represents no monopoly threat, and was not present at the hearing.

Jim Sensenbrenner, from Wisconsin, used much of his assigned time to ask Zuckerberg about Donald Trump Jr’s account being briefly suspended earlier in the week for sharing a misleading video about coronavirus. A valid question for somebody, perhaps. The problem was, Don Jr’s suspension didn’t happen on Facebook. “I think what you might be referring to happened on Twitter,” Zuckerberg replied.

At times, the hearing turned to tech support. Republican Congressman Gregory Steube asked Pichai why emails from his campaign were going into his father’s Gmail spam folder. Pichai could barely suppress a smirk in answering that junk filters are not politically biased. In the space of minutes, questions swerved from whether Apple and Google use slave labour to why Amazon’s Fire TV service does not have the HBO channel.

As for the executives themselves, no serious blows were landed. Cook, who is facing a growing revolt over the fees Apple charges app developers, sailed through the hearing, facing far fewer questions than the rest. Zuckerberg and Pichai, the two youngest of the four but the most experienced monopoly defenders, repeated well-worn talking points and ducked questions.

Surprisingly, Bezos appeared the most rattled. In his first Washington grilling, he tripped over questions and appeared unable to remember key moments in Amazon’s history. The world’s richest man bore little resemblance to the globetrotting alpha male that exists on his Instagram account. It remains unclear which one is the real Bezos.

Some revelations emerged. The committee published internal Facebook emails that showed Zuckerberg wanted to “neutralise” Instagram before acquiring it in 2012. Documents showed Google staff worrying that it was sending “too much traffic” to rival websites.

But none of the executives were forced to reckon with the core questions about the tech giants: are they too big, and does too much of the economy rely on them? Nor was there any memorable moment that will seriously harm their reputations. By the time the hearing was over, shares in all four companies had risen, and Jeff Bezos was $1.8 billion richer than he was the day before.