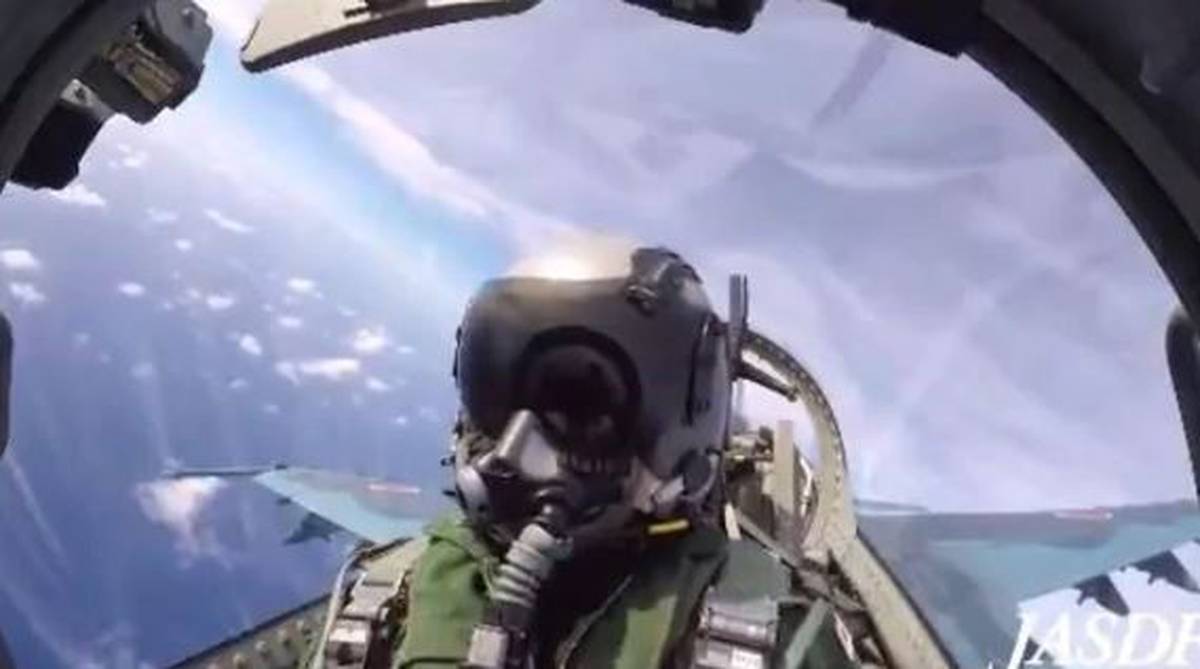 Japan is on edge after scrambling fighter jets 847 times to intercept intruding Chinese bombers as tensions over disputed zones soar.

In the 365 days to March, Japanese Air Self Defence Force (JASDF) fighter jets had to respond 847 times. In the four months since, such interceptions have only accelerated.

Yesterday, fighters of ASDF scrambled to cope with suspicious aircrafts heading to Japan’s airspace above the Sea of Okhotsk, the Sea of Japan and the East China Sea.
SDF continues to take all initiatives to engage in airspace antiintrusion measures.(a sample image) pic.twitter.com/QHfpWAVdFJ

Shirota leads a squadron of F-15 Eagle interceptor fighters based in Okinawa. His aircraft are being routinely called to identify “abnormal” radar contacts.

Most have been over the disputed Senkaku Islands, a group of uninhabited rocks between Japan and Taiwan.

But Russia’s also been increasingly busy, also surging its aircraft towards Japan regularly. This has Tokyo on edge.

“Military powers with high quality and quantity are concentrated in Japan’s surroundings, where clear trends such as further military build-up and an increase in military activities are observed,” it warns.

It accuses Beijing of attempting to “change the status quo by coercion in the sea area around the Senkaku Islands”.

It says China’s military has been “making forays into the Pacific and the Sea of Japan” with the intention of making such acts a new normal”.

Beijing’s Foreign Ministry recently insisted that the “Senkaku Islands and its affiliated islands are China’s inherent territory”. But the uninhabited islands have repeatedly changed hands in recent centuries.

A recent move by Okinawa’s district legislature to modify its internal administration of the islands drew anger from Beijing.

“The bill is illegal, invalid and can’t change the fact that the Diaoyu Islands belong to China … China has made solemn representations to Japan through diplomatic channels, and reserves the right to further respond,” spokesman Zhao Lijian said. “China is firmly determined to safeguard its sovereignty”.

Japan believes the constant swarm of Chinese warplanes is part of a plan “to project armed forces to waters including the so-called second island chain, beyond the first island chain”.

“The Chinese Navy and Air Force have in recent years expanded and intensified their activities in the surrounding sea areas and airspace of Japan, and there are cases involving the one-sided escalation of activities,” the White Paper notes.

From July 22 to 25, fighters of ASDF scrambled to cope with suspicious aircrafts heading to Japan’s airspace above the Sea of Japan and the East China Sea.
SDF continues to take all initiatives to engage in airspace antiintrusion measures.(a sample image) pic.twitter.com/mMqiO8kJlF

The first island chain is defined by Okinawa, the Senkaku Islands, Taiwan, the Philippines and Malaysia.

The second island chain incorporates the major US Pacific Ocean base of Guam, the Marianas, the Caroline Islands and Papua New Guinea.

Japan represents the pinnacle of both strategic lines.

Which is why it’s been receiving so much attention from China’s military.

“We wait on guard on the ground all the time in tension,” JASDF pilot Shirota told CNN. “The same said while we are in the sky. Because we never know what we will face once we go up in the sky. We might see them (Chinese aircraft) leaving, or we might face off.”

The squadron commander shoulders a heavy burden. No other Western nation faces anything like this level of activity. Not even along Europe’s front with Russia.

Such is the persistence of the air activity that the JASDF now scrambles its fighters immediately combat aircraft are detected taking off from Chinese air bases in Fujian Province.

Beijing recently redeployed fighter jets from Zhejiang Province to Fujian to bring them closer to the disputed Senkaku Islands.

This gives the aircraft a shorter distance to travel (380km), and a greater “loiter” time around Japanese airspace.

Japanese aircraft responding from Okinawa, however, must fly 410km.

“The ASDF now needs to immediately respond to Chinese fighters when they leave from the air base and prevent them from entering Japan’s airspace,” the Kyodo News agency reports government sources as saying. “The JASDF used to respond to each Chinese military plane with two of its fighter jets. But it now does so with four”.

Tokyo says it has noticed more Chinese surveillance activity, with Y-9JB electronic warfare aircraft often lingering between Okinawa and Miyako islands. Other aircraft include H-6 long-range strike bombers pushing out into the Pacific through the Miyako Strait.

To the northeast, the pressure has primarily been from Russia in the Sea of Japan.

Its ancient (but upgraded) Tu-95MS bombers were involved in three airspace violations between April and December last year.

As a result, Tokyo is pursuing a major upgrade of the F-15 along with the purchase of 147 F-35 stealth strike fighters. It’s also designing and building its own stealth fighter after the US refused to sell copies of its ultra-advanced F-22 Raptor.

Indications are, Japan’s going to need them.

“It is legitimate for Chinese military planes to fly through the (Myako) strait, and more similar training will be conducted on the high seas as needed,” Defence Ministry spokesman Ren Guoqiang told Chinese media

“The parties concerned don’t need to overact and make a great fuss about it,” he added. “They will feel better after getting used to such drills.”