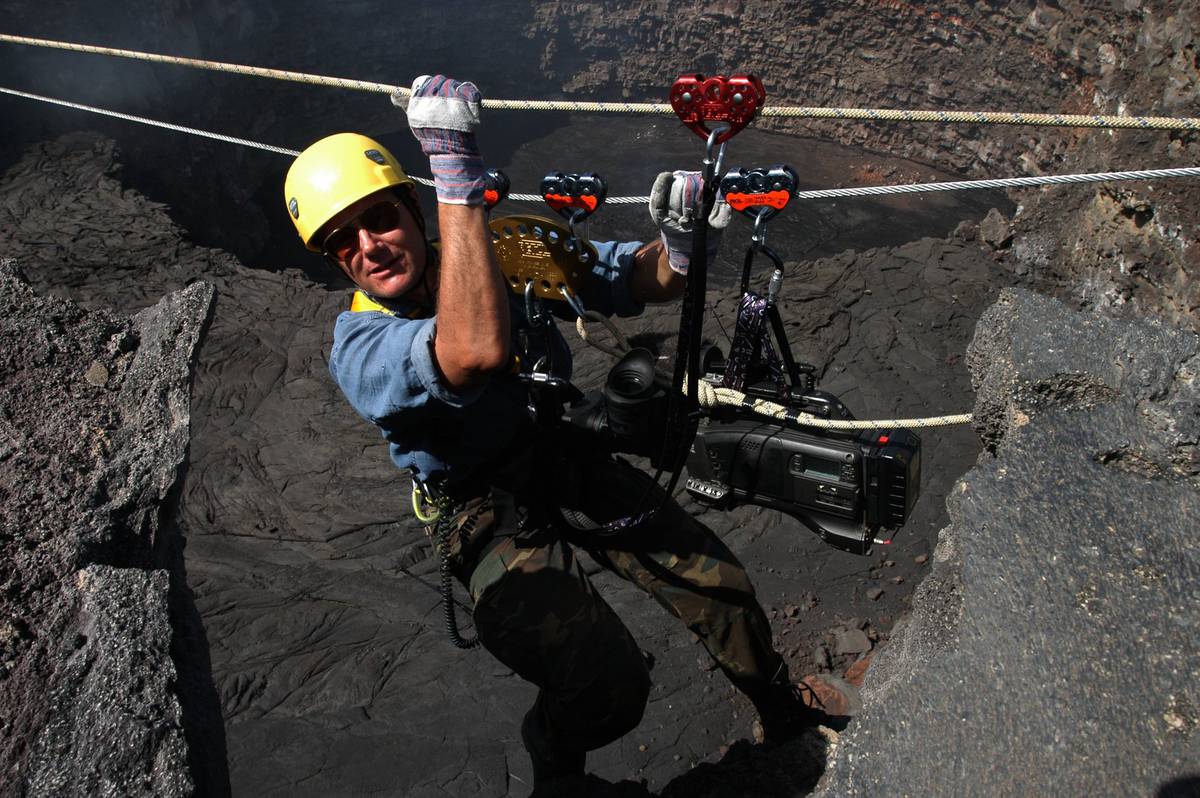 He’s filmed erupting volcanoes, cyclones, fires and tsunami around the world, but it was a dangerous situation in his Auckland home that put extreme photographer/cameraman Geoff Mackley in hospital this week.

Mackley told his Facebook followers “three c**** invaded my home and left me for dead”, before last night posting CCTV images of the men he says are responsible.

“And here is the line up of animals, two of the three people who home invaded me on Sunday morning, more photos and video will come tonight, spread this everywhere, if you recognise these scum, tag in their Facebook pages and comment or pm me,” Mackley wrote.

Mackley, who famously shot close-up footage of Mt Ruapehu erupting in 1995 and later had his own show – Dangerman: Adventures with Geoff Mackley – on the Discovery Channel, couldn’t be contacted.

Detective Senior Sergeant Kathryn Bostock said police are investigating an aggravated burglary at an address on Ballarat St, Ellerslie, which was reported on June 30.

She said the break-in is understood to have happened at 5.14am on June 28.

“Two men have approached the victim’s property and the victim has engaged with these men before being assaulted,” Bostock said.

“He has been knocked unconscious and the men entered the property and left after a period of time.”

She said the victim was taken to hospital and is recovering from his injuries.

Bostock said police are making a number of inquiries, including a forensic examination and analysis of CCTV footage.

Mackley told the Herald the men had been hanging around the property the night before and returned in the morning.

He said two men attacked him and “bashed me on the head”.

“The men took nothing, so I don’t know why they came for me or what they wanted,” Mackley said.

His post showed a photo of two petrol containers he said were taken from his ute.

He told followers those he says are responsible “can rest assured I will not rest until they’re identified and the rest of their miserable lives are ruined”.

“It’s all on CCTV, hope they enjoy their freedom while they have it.”

According to his Facebook posts, Mackley was discharged from hospital on Tuesday.

The freelance photographer and cameraman has previously spoken to the Herald about his some of his most memorable jobs.

In 2011 he tied himself to a tree, strapped on a helmet and lifejacket and then went into the core of Queensland’s deadly Cyclone Yasi to take pictures.

“It was fierce. Three-hundred-kilometre winds were whipping around, pulling trees out of the ground and debris was flying everywhere.”

In 2005, he told the Herald the Boxing Day tsunami – which killed 227,000 across several countries – was the largest natural disaster he’d seen from 70 similar disasters.

“A tsunami is capable of damage on an unbelievable scale. I am pretty convinced that is going to be the largest natural event that will happen in my lifetime.”

He filmed the aftermath in several areas, including Indonesia’s Aceh province, where tens of thousands died.

“It was like images taken from World War II.”

However Mackley, who is in 50s, said filming natural events was not that dangerous.

“What I am doing is potentially dangerous but most of my close calls have involved getting sick or travelling on trains in Third World countries.”

He has also previously been the victim of crime – in 2006 his $40,000 Panasonic AJD 800 Broadcast TV camera was stolen after a thief broke into his assistant’s car in the Auckland suburb of Owairaka.

Police are asking anyone who may have witnessed suspicious behaviour in the area at around 5am on June 28 to contact Auckland City East CIB on 105.