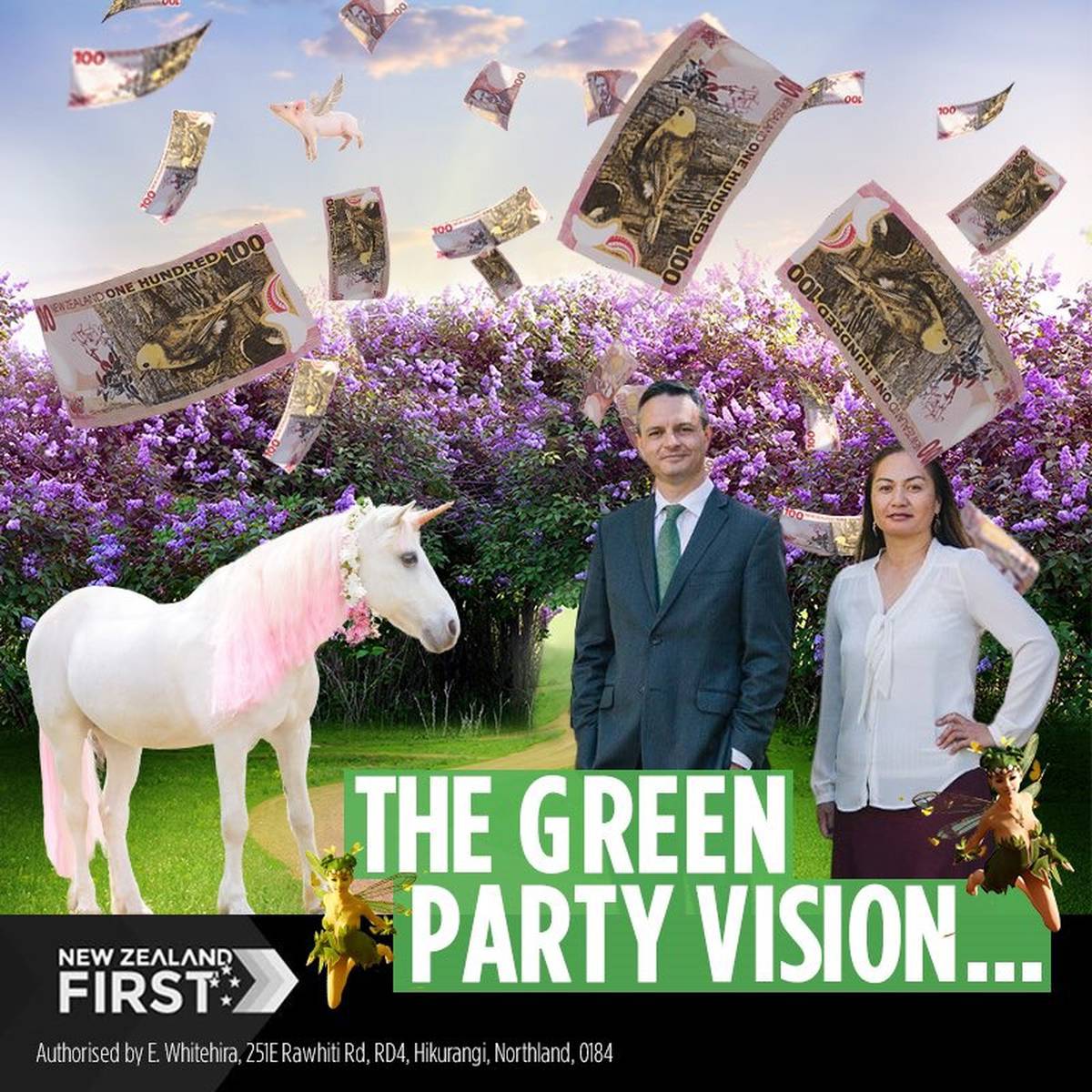 New Zealand First has doubled-down on its attacks against the Greens’ wealth tax policy with a mocking online post that features raining $100 bills, pixies, flying pigs, and a pink-maned unicorn.

But the image that was posted by New Zealand First on its official Facebook page on Thursday may have backfired.

It lampoons Green Party co-leaders James Shaw and Marama Davidson with the fairytale symbols, accompanied by a caption that says: “But unfortunately money doesn’t just fall from the sky …”

The post has received more than 600 comments, with both NZ First and the Greens copping criticisms and sideswipes.

While another tweeted: “Hey that vision is pretty awesome. Roll in the unicorns!”

It comes after New Zealand First leader, and current Deputy Prime Minister, Winston Peters launched a scathing attack on Labour, his coalition partner, and the Greens.

A Government of those two parties in a coalition, Peters said, would be a “nightmare”.

“If you think a red-green [Labour-Greens] government is good for you, then you’re in cloud cuckoo land,” he said in a speech on July 21.

“These people are away with the fairies,” he said, referencing the Greens and their wealth tax policy.

Peters suggested that the Greens and Labour in power together without NZ First as an “insurance policy” would mean more tax for New Zealanders.

“They say they want to get close to you: they’re right. [It’s] so they can put their hand down the side of your body, and into your wallet.”

Shaw later fired back: “In my experience over the last three years, NZ First has not been a moderating force, but a force for chaos.”

which features Shane Jones standing around with a white elephant somewhere in Dargaville while Provincial Growth Fund cash rains from the heavens into a farmer’s pocket pic.twitter.com/TqY9tUolju

Hey that vision is pretty awesome. Roll in the unicorns! 🦄

He added: “Their organisational culture is chaotic.”

Asked about the “nightmare” comments, Prime Minister Jacinda Ardern said: “I think the Government that we have been over the last three years has been one focused on New Zealanders.”

She said she put Peters’ comments down to “an election period”.

“It’s an election period and you will see parties starting to differentiate.”

At his party’s annual conference last month, Peters said that NZ First had “used common sense to hold Labour and the Greens to account”.

And he took aim at the fact that a number of Government ministers from Labour have been forced to resign their positions over the past three years.

He said while front-bench Ministers have been “spilling out of Cabinet” there have never been any questions about “competency or controversy” when it came to his party.